News of Stephen Sondheim's new musical was enuf to draw me to San Diego in the winter of '87, stirred by the intrigue of fairytale characters in a mashup of Walt Disney & Bruno Bettleheim. I was ready to revive my faith in Sondheim after the huge letdown of Sunday in the Park with George--which aside from its chef d'ouerve: the final assembly of Seurat's painting as tableau vivant--was,  to my taste, a pretentious "art" musical, and a collosal bore. But then it's always hit or miss with me & Steve. And generally against the prevaling grain. He may have lost me with Sweeney Todd but won me back with Merrily We Roll Along. Even his shows which I liked were rarely without some wrong notes; to say nothing of the ones I couldn't bear. Being the show's tryout, Into the Woods was a bit in the weeds in Balboa Park, but there was potential there, and I had mixed but hopeful feelings it would find its shape for Bway. From a critical and commercial viewpoint it certainly did.  Some love it beyond reason. But I could never muster up much interest in it, let alone affection. 27 years later it arrived on screen in a loudly-touted Disney package; the general public if not by now accustomed to the prestige of Sondheim, would be spoon-fed by the Mouse House.

James Lapine's head-spinning libretto throws together a catalog of characters from the Brothers Grimm playbook in an elaborate roundelay of mix-and-match-ups that play out as if built on the stringed-diagram of a police investigation. There is more plot per page than just about any other musical, achievable via our ingrained familiarity with its fairytale  tropes. Indeed, the opening number, which requires a narrator to parse ("Once upon a time...") sets up more narrative than most entire shows. This isn't merely Cinderella's tale (as was enuf for Rodgers & Hammerstein to musicalize) but one which incorporates Jack & his beanstalk, Little Red Riding Hood, Rapunzel, Sleeping Beauty, Snow White, a generic Giant and an all-purpose Witch. Lapine contrived a Baker and his Wife--not familiar as the others, but not out of place either--whose quest is to reverse a curse (on their inability to breed) thru a scavenger hunt. The whole thing is an elaborate puzzle, something up Sondheim's alley, yet the result is more of a technical achievement than a holistic entertainment--but enuf to secure a reverent position within the Sondheim canon.  But to my mind a veil of elitism hovers over this strain of Sondheim--a construct of cleverness that stimulates (if it does) the intellect but engages little in the heart--which according to Adler & Ross, "You've got to have..." Imagine if you will, a broader, more musical comedy "Broadway" concept with a book by Abe Burrows or reconnecting with Sondheim's Forum partner: Larry Gelbart. In other words, something funny. Really funny, as in farce funny. No, the choice was to take this seriously, as metaphor and psychology: something to think about. A few chuckles, no boffo laughs. Deep, inner meaning.

The show was ear-marked for film adaptation quite rapidly--something of a rarity by then. The first try given to screenwriters Lowell Ganz & Babaloo Mandel--riding a commercial streak from Splash, Parenthood, City Slickers, and A League of Their Own--comedies. Yet an industry reading with a starry cast: Robin Williams & Goldie Hawn (as the Baker & his Wife), Cher (as the Witch) Steve Martin (as the Wolf) Roseanne Barr (as Jack's mother) and Danny DeVito (presumably ironic, as the Giant) produced no momentum. Soon after, Columbia (with Jim Henson and Craig Zadan producing) developed the project for several years--with Billy Crystal, Meg Ryan and Susan Sarandon in talks--before going into turnaround in 1997. It took director Rob Marshall, after his success with Chicago, to get the ball rolling again; asking Sondheim for his blessing to film either Follies or Sweeney Todd. Steve suggested Woods instead, and thus the film wound its way to realization, with a new screenplay by original librettist James Lapine, but a cautious budget of $50 million--Disney still somewhat shy of the show's darker themes. Not to mention its duller or repetitive moments. And the plot- heavy narrative was trimmed from some its many detours (such as the two Prince's affairs with Snow White & Sleeping Beauty); major character's deaths were shown with less violence, and six songs were fully cut, including the first act finale, "Ever After." However, there's still plenty of meat on this bone with a dozen characters getting roughly equal time and narrative importance; an all-star forest (unseen for the trees?) And no shortage of musical passages, if not full on numbers.

Lapine centered his story around the Baker and his Wife. Chip Zien & Joanna Gleason originated the roles on Bway. Gleason (who, let's make a deal, we easily forget is Monty Hall's daughter) brought a beatific simplicity to her playing that earned her the sole Tony among the cast. A similar miracle assembled in the person of Emily Blunt for the movie--an actress illuminated from within, a quiet stunner who here must have (unknowingly) given her audition for Mary Poppins. The Baker is James Corden, who manages to be wholly appropriate yet largely unappealing. Tho no larger than any other role, the Witch has attracted Star talent from the start, with Bernadette Peters continuing her Sondheim romance. Thus it 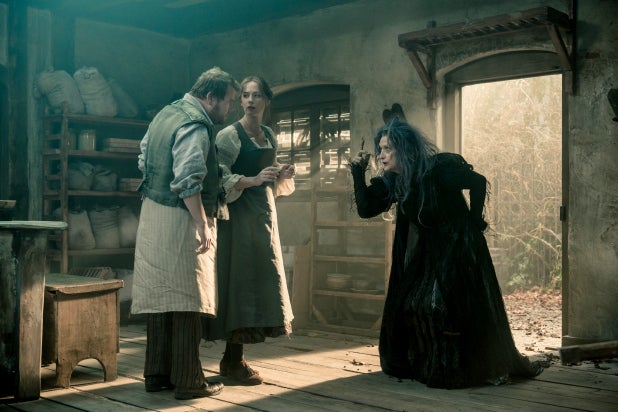 seemed no overreach to secure Meryl Streep for the movie; who dove into it with glee. Anna Kendrick is a toothy Cinderella, and the two Princes are Chris Pine, who is billed above the title, and Billy Magnussen who's not--tho in equal roles. As for Little Red's Wolf, the part is short enuf that it pairs on stage with Cinderella's Prince. But no part is too small for Johnny Depp to cameo his signature weirdos. Made up like a Tex Avery cartoon character in a zoot suit, crooning half a seduction song, he earns his billing. His vis a vis is a Red Riding Hood (Lilla Crawford; apparently the result of an exhaustive search) who alarmingly suggests a pre-teen Ernest Borgnine. (For some reason I kept wanting to call her "Chester.") Another rare, beautiful and funny talent, Tracey Ullman, is rather wasted in a lackluster role as mother of Jack (of the fabled Beanstalk), who spends much of the movie looking for a cow. Christine Baranski enjoys a far campier romp as Cinderella's stepmother, tossing her evil barbs like glitter, sheparding her two vacant daughters like bait. Frances de la Tour plays a Giant's vengeful widow, wreaking havoc on the land; but barely seen--and quite oddly, as if projected on a screen in the sky rather than three dimensional.

Visually, the film is lensed in a soft-focus, sunlight-stingy palette, all dreary, hazy shades of brown, green or gray. To my eye, entirely (almost purposefully) missing the serene beauty or the enchanted magic of The Woods as illustrated by numerous artists, or featured in previous films shot in the fertile British countryside; as was this one. Nor was any oomph given to even the Royal Palace--seen here not in the least matching up to the fairy-tale Disney castle logo that opens the movie like a storybook. No, this is a drab brick Norman fortress, whose interior we never see; only shots of Cinderella fleeing the exterior bridge and staircase.  Perhaps one location that was exquisitely utilized was an artificial waterfall found at Windsor Great Park that served as stage for the two Prince's duet, "Agony"--one of the few good numbers in the musical. And visually the closest any-thing comes to magic.

As a wannabe Classic in the league of The Wizard of Oz, Into the Woods greatly misses the mark. A simple comparison between Sondheim's title tune, which sets the pace and theme of the show, with Arlen's "We're Off to See the Wizard," demonstrates a key difference: joy. I don't hear it in Sondheim's music here, there's no romantically longing "Over the Rainbow," but instead a chilly "Children Will Listen." No sweeping Rodgers waltz for Cinderella ("Ten Minutes Ago"), but an introspective musing, "On the Steps of the Palace"--and filmed here with the action in freeze frame behind her. The journey here is a scavenger hunt for (ironically?) iconic totems of its fairytale personages: Red's cape, Rapunzel's hair, Cinderella's slipper--as ingredients to reverse the Witch's curse, turning Meryl Streep back into Middle-Earth Miranda Priestly; and instantly planting child into Blunt's belly--a babe in arms by the next scene. But having produced progeny is it really necessary she die? Are such random deaths (for Tracey Ullmann, as well) really needed to provide a rejoinder to Happily Ever After? We get it, it's an Adult fairytale. Which is why the Child-in-Us gets restless & bored as the second half labors on. I wish the encounter between the Baker's Wife and Cinderella's Prince were anywhere as exciting or poignant, as we're meant to think it is. As it stands, I don't even know why they bothered, other than to give her a quick thrill before she expires. In the end we come to a foggy moral lesson--not a warm & fuzzy "no place like home" but a less convincing compromise. "No One is Alone," goes the post-apocalyptic anthem, gathering families from the remains of devastation. I happen to think we are all, ultimately, alone. But in any case I'm not swayed by the lugubrious tune selling their case. Think of Carousel, and the catharsis of "You'll Never Walk Alone." This  doesn't come close to generating such emotion. 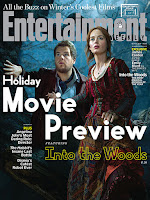 A year has passed since I've been able to resume writing--affected in no small measure by my relocation from San Francisco to my "forever home" in Palm Springs. But in truth as well as finally being in a receptive mood to watch Into the Woods again. I had seen it once before, the month of its release, at the Lucas Screening Room in San Francisco--one of my last times viewing a film in an actual theater. (Age, convenience and jadedness make Jack a lazy fellow.) The overwhelming impression left by this second screening is: dreary and unrelenting. I want to like it, I really do. But alas, even with this highly attractive cast, I cannot find an ounce of enchantment in it. But apparently not so for a good many. Opening on Christmas 2014, the movie made a nice $128 million domestic and $85 million overseas. Critical opinions were largely positive, tho the Academy was somewhat cool on it, failing to nominate the film in nearly all major categories, coming up only for production & costume design, and the unstoppable "supporting" Meryl Streep--her 19th Oscar nom. The Grand Budapest Hotel  took both design awards and Meryl lost to Patricia Arquette in Boyhood. Meryl and Emily Blunt were both nominated for Golden Globes--the latter as leading actress, and the film in the separate comedy/musical category--but again won nothing. The American Film Institute chose it among the top 11 (?) films of 2014, and Streep won a "Best Villain" accolade at the MTV awards. Now how about giving her something with real potential? Like Sunset Boulevard. 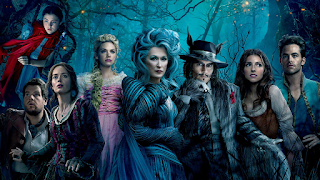