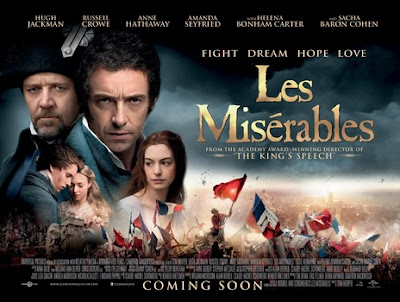 Who today actually reads Victor Hugo's historic 1862 novel--all five volumes and 365 chapters over 1,500 pages, rambling off-topic over a quarter of its length with essays on religion, morality, urban design and the meaning of Waterloo, among a catalog of subjects? (All of which I know courtesy of Wikipedia) For most of today's planet, Les Miserables is now (& forever) an internationally successful Pop Opera--for better or worse the very definition of the genre. Originating, like the novel, in France, the title is so venerable rarely is it translated into English or any other language; understandably evoking more charm or appeal than a literal translation like The Miserable Ones or more bluntly put, Misery. A theatrical phenomenon on a scale beyond even most Bway smash hits, Les Miz (as commonly abbreviated) tho widely loved, is as often derided by musical theater connoisseurs. As Ethan Mordden points out, Pop Opera reaches for a generic universality which makes for a hollow-feeling core--a sense of coming from nowhere, not somewhere honestly rooted. Of course, Frenchmen Claude-Michel Schonberg & Alain Boublil wrote the show for Paris, but Brits John Caird & Trevor Nunn shaped the show for London and subsequent international productions. Opening on Bway in 1987, it ran for 16 years and has already been revived twice. The West End production, however, has been running continuously now for well over 30 years; which only goes to prove: misery loves company.

I never felt the love myself. From my first exposure to the album thru production on stage and now film, I remain unmoved. I find the score musically pedestrian with lyrics blunt where they should be poetic--an enormous bore; sincerity & bombast without distinction. Its fame rests on a trio of tentpoles: the full-throttle arias, "I Dreamed a Dream" and "On My Own," and the act-ending call to arms, "One Day More" (which cribs half its line from "Dream"). Woefully, the rest remains painfully monotonous, especially the relentless recitative that hews the piece to Opera rather than simply (less-pretentiously) a Musical. On top of which, a time-jumping narrative outlines an endless chain of misfortune, struggle, abuse. What's the word? Oh yes, misery. Fight/Dream/Hope/Love reads the film poster's copy. A nice set of directives--which could more accurately be replaced with just a single word: Endure.

I don't recall approaching any movies in this survey with as much dread, and I put off viewing it for as long as I could. Some of that, no doubt, stems from my present state of mind; tentative, weary, anxious, on the verge of major change; on top of which the current political climate casts a dark and frightening shadow across America--led by that would-be dictator on the throne; manifest in the widespread decline of civil behavior and tolerance. In an increasingly ugly and violent society, entertainment both reflects and glorifies depravity. Do we really need musicals to join in? So, OK, perhaps I'm overreacting; it's a World Literature classic, after all--(not a gratutious piece of shit porn like Silence of the Lambs)--a tale as old as time. If that's the case then the fault must lie in the telling. 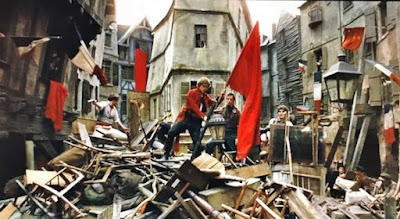 Onstage Les Miz utilizes a turntable and skeletal scenery out of necessity, but a film, of course has the luxury of realism, even if it's pumped up with fantasy CGI. From the start Hlwd's version goes for the IMAX jugular, opening with a stormy scene of colossal human labor, hundreds of slaves pulling a mountainous ship into dock. It almost makes Ben Hur look like a Sandals resort. There will be various moments of such epic tableaux, but for the most part the movie is kept close and personal to the characters. The scorched purity of Jean Valjean--jailed 19 years for stealing a loaf of bread--to feed a child no less. A week wouldn't be enuf punishment? Is it possible to lack that much empathy without at least a racial bias to give it credence? Or consider the twisted righteousness of Javert who perversely ignores Valjean's redemption. Is he so blind with misdirected rage not to see this as a model transformation? Or Fantine's expulsion from the factory.  On and on . . . But I digress . . .

Producer Cameron Mackintosh made a fortune from endless stage productions, and took a chair among others on the film's team. For director they chose Tom Hooper, with a resume of British costume dramas building to his Oscar win for The  King's Speech. He would guide Les Miz to a Best Pic nomination in the recently widened category, but not find himself in the five slots for Best Director. Beyond the upgrade to epic "realism" the movie luxuriates in major Hlwd casting. Who could object to Hugh Jackman & Russell Crowe as the main adversaries? Or Anne Hathaway and Amanda Seyfried as the hapless heroines? Fresh, breaking Bway talent like Eddie Redmayne and Aaron Tveit make for attractive revolutionaries. Throw in one genuine ingenue, Samantha Barks--unknown outside the West End. One by one, each are given platform to sing their hearts and guts out--tho most are not quite singers. Hooper takes his frame in close for each aria--painfully close--magnifying the histrionic emoting. The actors don't sing the songs as much as punch them up in go-for-broke acting exercises. Hathaway turned her raw, hair-raising, hair-shorn  solo,  "I  Dreamed  a  Dream"   into  an   Oscar.

Jackman had to settle for a nomination (but who could beat Daniel Day Lewis's Lincoln?) Crowe waxes philosophical while treading upon ledges, until at last he hurls himself off in despair. Then there's Sacha Baron Cohen and Helena Bonham Carter, inhabiting a different movie altogether, as villainous innkeepers appearing like walk-ins from a Tim Burton film. "Master of the House" is the show's single attempt at comedy--but is such a lame number it makes me long for Lionel Bart. Carter & Cohen make slapstick mince meat of it, but it doesn't comport with the rest of the film. 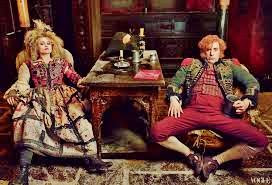 The movie opened wide on Christmas Day, 2012. The starry cast gave catchet to an already marketable title, and likely helped push the domestic gross to $148 million--the highest for a musical since Chicago. Global figures were nearly twice that. Factor in 8 Oscar nominations (winning 3), Les Miz was unquestionably a hit film musical, riding a torrent of publicity, acclaim and hurrahs that December--with Obama safely re-elected and the world receptive to a 19th century French epic, sung-thru by some Hlwd faves. I finally got to it sometime in July. Suffice it to say I didn't view it again until preparing this entry. 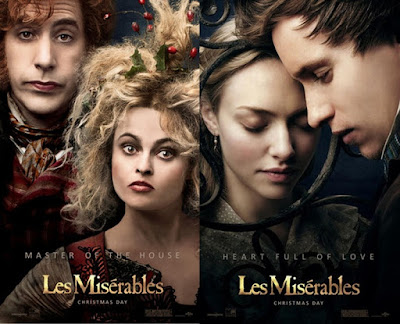 I was otherwise engaged that December. It seemed inconceivable but I was turning 60. As it happened, the second Playbill cruise was sailing over my transition, and as the route was the one other I couldn't resist: Buenos Aires to Rio (during the South American summer)--it was fated. Larry Rubinstein was game again--as he always is--and I was able to go ahead a few days and pop over to Montevideo (a ferry ride away) and indulge my curious life-long obsession with Uruguay on my own. After meeting Larry for half a week in lovely Buenos Aires, we were back (on ship) to Montevideo and further to Punta del Este, but the thrill of my mini-intro to this far-flung fantasy was price-less. The cruise reunited us with Jeff & Karen Seltzer, whom we'd just met on the previous sail, but now became our good friends and anchors. Seth Rudetsky was back as musical director. But if my goofy pal, Andrea Martin wasn't along this time, I got to discuss David Yazbek's amazing score to Women on the Verge of a Nervous Breakdown, with Sherie Rene Scott. And enjoy some giddy/disarming flirtations with Jason Daniely. 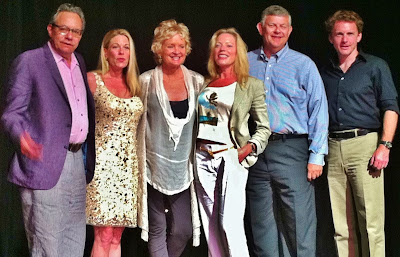 We had a full day at sea on my birthday and a most wonderful one it was. Very quickly we found ourselves invited into an clique of 60-something married couples, who all seemed to adore us. Jeff & Karen were mostly responsible, as these were folk they had made acquaintance with on the previous cruise. One threw a cocktail party in her suite (the largest on ship) for my birthday, with a small crowd, including Playbill publisher, Phil Bersch and Judy Perl--the cruise agent. Since the last cruise Jeff & Karen had become pals with Christine Ebersole & her husband, Bill; so now I was drawn into their orbit. Early on I suggested Christine sing "My Ship," having done Lady in the Dark at Encores! which she thought a wonderful idea; and a week later she performed it at a Playbill event--"at request"--tho Seth pointed out they don't normally do requests. It was wonderful, funny (for her "trumpet solo" in the bridge), and felt like an extra special gift to me. Seth Rudetsky was a completely different person this time, and we connected on a more personal level. My knowledge in the trivia contest made me known to many as "that know-it-all," which brought forth the repeated, if bafflingly inane query: "How do you know all that stuff?" Oy. The response was such that Playbill insisted on staging a contest between Seth & I--and did--which was rather uncomfortable for me, set in the main theater with an audience that included all the Playbill performers. Lewis Black nearly shut down the whole thing by questioning one of editor Blake Ross's more inane/absurd questions. It kinda fizzled out, but I sure got a lot of attention on board. The Playbill shows were mostly splendid (the exception being Marin Mazzie's bizarre, "These are songs I liked growing up in the '70s" program); to say nothing of how chilly and unengaging her presence was. Christine was the best, improved from the year before, with all new material ranging in character, tone, mood and vocal ability. Sherie Rene was fun, too--the only one to acknowledge our whereabouts, with a Brazilian samba medley. And Seth played accompaniment with proficiency and finesse. Jason Danieley didn't get his own show, but did a matinee with Marin (his much older wife) about their initial romance--he sings divinely, but sadly their voices do not mesh well. Lewis Black toned down his political raging but was hysterical about the cruise ("Why is the staff happier than the passengers?") I imagined a potential Woody Allen-ish movie about a comic on a cruise. When I told Black, he said he'd tried to sell Hlwd on such a script--with no luck. He talked much about his mostly failed playwriting career, which Larry thought rightly absurd, but I found interesting, no doubt by how much I could relate. "My ship" sailed into Rio harbor on a disappointingly foggy morning--I get enuf of that in San Francisco. But the city's landmark beauty came out in the midday sun. We embarked for Copacabana post-cruise, and with our last minute, newest and most intrepid friends, Mike & Eliot (who it turns out lived but 2 blocks from me in SF) we finished the trip off in visceral exotica for a few days more. (Why isn't there a great musical set in Brazil?) But I digress. . .  Again. 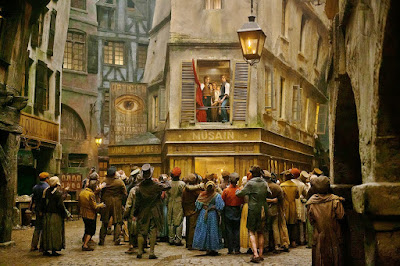 Next Up: Jersey Boys