The songs of Frankie Valli & the Four Seasons were in my attic of memories; pop ditties that amused me during my pre-teen years, but had little hold later once I'd begun to absorb the more sophisticated writing found in Bway musicals. Coming upon them now, they seem silly enuf to be parody or novelty numbers, with such campy sentiments as "Big Girls Don't Cry" and "Walk Like a Man." The trouble with jukebox tuners is that the songs aren't written for theatrical context --which hasn't deterred their proliferation, nor limited their popularity and commercial success. Which leads them to one of two paths: either an entirely conjured plot written around the existing non-contextual lyrics (see: Mamma Mia, Rock of Ages, Waitress,) or the Bio-musical route; a group or individual celebrated in a chronology of song hits: The Boy from Oz, Motown, Beautiful--and the King of the Hill: Jersey Boys, which berthed from La Jolla to Bway--running nearly a dozen years (4,642 performances), spawning numerous touring companies and sit-down productions, including the inevitable (and ideal for) Vegas fixture for 8 years. I get that, but the seemingly infinite popularity around the globe frankly puzzles me. 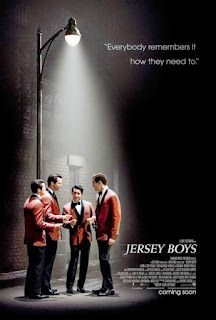 I had to watch the film twice before I could let go of my prejudgment against what I expected would be a lame excuse for a concert of Frankie Valli hits. As written by Marshall Brickman & Rick Elise,there is more story here than music, inclining toward a mob drama over a show-biz chronicle. Sort of a junior Goodfellas with period song hits popping up once in awhile. (Joe Pesci is even a featured character here, as the young Joe Pesci, the one to introduce Valli, Nick Massi, & Tommy DeVito to songwriter Bob Gaudio--the final element in the mix to success.) Each of The Four Seasons (group) are given their say, tho not labeled as seasons per se (as in the stage show); each to break the fourth wall and address the camera every once in awhile-- narrating their own angle. The Quartet are unfamiliar actors, which lends them cachet as stand-ins for faces I didn't know anyway--which, I suspect would go for most audiences nowadays. Vincent Piazza's Tommy DeVito thoroughly reeks of trouble, not saved in the least by his Italian good looks. As neither major contributor nor big talent, his importance to The Four Seasons is inflated by his own self-destructive ego. Michael Lomenda convinces as the self-described "Ringo," Nick Massi. Erich Bergen, on the other hand, truly stands out as Bob Gaudio, a welcome contrast to the Newark ethos prevalent elsewhere. So, too is Mike Doyle as record producer, Bob Crewe--whose queerness is compared to Liberace, who says Massi, everyone excused as just "theatrical" As the lynchpin, Valli, John Lloyd Young was the one original Bway holdover--no worse for wear nine years later. He won a Tony (over no serious competition) and must suggest a solid facsimile of Frankie Valli, but the perf doesn't exactly impress on screen with the same force. I have to say that after all the talk of Valli's "amazing" voice, the first time Young lets loose in Frankie's falsetto, it sounded so cartoonish I couldn't help laughing. This was the sound of a promising vocalist? The script paints Valli in no uncertain terms as the moral center of his universe. Not for him the perks and excesses available to pop stars of the '60s; no Frankie Goes Hollywood, this one is painted as a church-going, family-first, straight-up kinda guy--whose professional occupation nonetheless prevents him from letting his wife slip into alcholism and his daughter into drugs and death.

But low-level gangsterism aside, the impetus for the show is, of course, the music--its creation and performance. And tho a heavy whiff of that tired trope: "And Then I Wrote..." wafts thruout, there's undeniable pleasure in gleaming various backstories; the building of "Sherry" from instant four-part harmony on first try, to the American Bandstand; Tommy's comment watching Kirk Douglas slap Jan Sterling in Billy Wilder's Ace in the Hole, as genesis of "Big Girls Don't Cry"; the Four-ever-changing-Somethings finding their final moniker off a neon bowling alley sign, etc.  The kinds of "inside" moments that are the raison d'etre of musical bios. One especially sweet bit of nostalgia has the Quartet hitting Times Square to land a record deal. Arriving at the fabled Brill Building  the camera rises up & up as we hear the various groups and singers making their pitch on each floor. Details such as this call attention to the pic's professionalism. The best musical number however is outside the narrative: an MTV-style video of "Oh, What a Night" with the whole cast stepping out on a studio street set--which serves as the film's end titles. 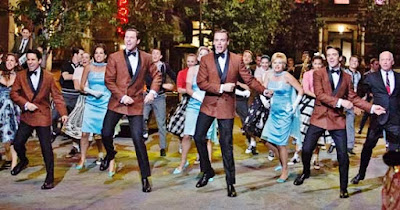 Clint Eastwood has demonstrated a solid taste for and skill with music, neverminding his own musical perf in Paint Your Wagon. As a director, the man delivered a stunning Charlie Parker bio in Bird, and has himself scored the music to no less than 18 of his own films--demonstrating a taste for jazz, blues & r&b. As Oscar's oldest winning director, Eastwood had an additional decade on him when he made Jersey Boys at the age of 84. And he's even made another 3 movies since, including another one (American Sniper) nominated for Best Picture. Upon consideration this iconic, laconic movie star  has accumulated an even more impressive resume as director over five decades, including two Oscared Best Pics, Unforgiven and Million Dollar Baby, along with Mystic River, Space Cowboys, Gran Torino, The Bridges of Madison County, Letters from Iwo Jima, Flags of Our Fathers and Midnight in the Garden of Good & Evil, among many others. Surely he's our latterday equivalent of John Ford or John Huston--or both. And tho Jersey Boys fits neatly into his ouevre, it was no bullet point. 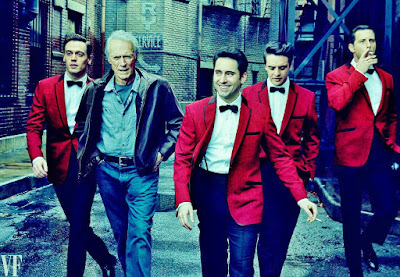 By the time of the film's release, Bway was in deep with jukebox and other parasitic concepts crowding its theaters. The season leading up to Jersey Boys film premeire, had new musicals about Janis Joplin, Carole King, Billie Holiday, Motown, and The Beatles. The other, ever-active trope: the movie-made-into-a-musical was even more rampant: Kinky Boots, Big Fish, Rocky, The Bridges of Madison County, Bullets Over Broadway, Aladdin. Astonishingly the most unusual, if delightfully retrograde of them all won the Tony and ran longer than such rarefied, intelligent shows usually last. A Gentlemen's Guide to Love and Murder was based on one of the greatest Ealing British classics, Kind Hearts & Coronets--a particular favorite of mine; which made me naturally skeptical of the prospect, particularly from an unfamiliar team (Robt. L Freedman & Steven Lutvak--who are no more familiar to me now.) But deft and delightful as it was, it was more reminder how far Bway had strayed (some say "evolved") from it's golden era of Musical Comedy. New original musicals now were more along the lines of Next to Normal, If/Then and The Scottsboro Boys.

As for me, this was a time of laying groundwork for the future. Nose to the grindstone I continued working as liasion between the City and Builders & Architects; watching films and writing my blog; and upgrading my future palace in Palm Springs in quarterly visits, financed by vacation rental income. Evidence of the evolving world, if perhaps just my own take on it, is in the single visit to a Cinema I made in a year & a half--a lifelong habit (if not passion) gone obsolete by the tsunami of entertainment available on TV and the Web, growing exponentially in budget, quality, form and convenience as to encourage homesteading--and let's face it, particularly for those over 50 whose desire & need to socialize about town recedes. Alas, my attendance to live theater grew rare as well; tho something leads me to suspect San Francisco itself played greatly into that aversion. More than anywhere else, I saw five decades of change in the city, and by then I was far too jaded to maintain any sense of enchantment about the place--which truly once was Oz to these eyes. Perspective is one perk of aging, and tho I'm often daydreaming of episodes past in the many chapters of my life (or times imagined or gleamed from movies, photos and records) I didn't really swoon to the milieu of Jersey Boys--even tho it depicts my favorite era. As light entertainment the show has certainly been a financial bonanza, but the film--which might be considered an upgrade--was only a fair performer, earning $47 million domestically, and $65 total globally--but cost $58 mil. My own low enthusiasm surprised me, for surely I rocked if not rolled to 4-Seasons AM-radio hits in my pre-teen youth. Some things just don't stick. Truth to tell I was listening an awful lot to Boy George's Taboo while wrestling this article. Now that has somehow stuck in my brain. I'm waiting for the movie. Please, someone out there? (I hear even Soderbergh is filming on iphones now.)


Next Up: Into the Woods 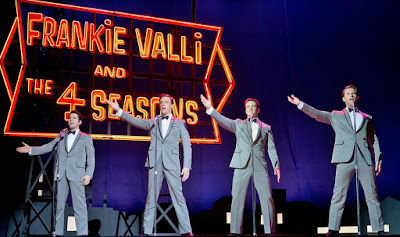